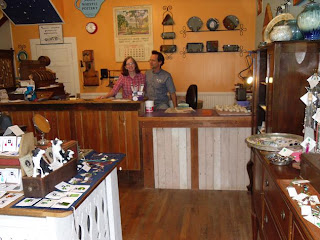 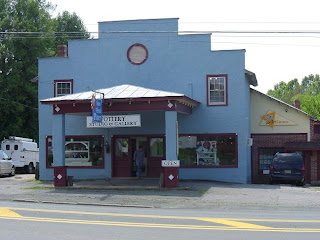 If you're planning a visit to my neck of the woods in Virginia, be sure to stop at Noon Whistle Pottery on Main Street in Stanardsville. You'll be so glad you did. The shop is owned and operated by John and Holly, and has some of the most amazing stuff for sale, items you won't find anywhere else. I love this place. I'm always telling folks to stop by and check it out. A travelers paradise for those who love quaint little shops offering homemade crafts, pottery, paintings by local artists, and of course, my books.

John makes gargoyles out of clay like you've never seen, and Holly crafts some of the prettiest dinnerware I've come across. Homemade handbags, jewelry, and so much more are offered there, too. Visit their website and see for yourself. http://www.noonwhistlepottery.com Enjoy your visit, and tell them Ann sent you!
Posted by Ann Mullen at 8:29 AM 3 comments: 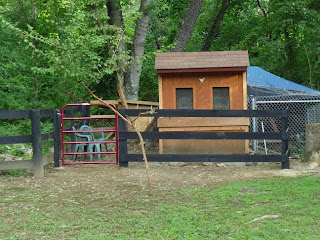 Tom and I knew very little about donkeys when we bought them. We just thought they were cool and would be fun to have as pets. We didn't know what they ate or how to take care of them, but we figured we could learn just like we did with our chickens. And learn we did. We now know they eat and poop all day long. That's what they do. ALL DAY LONG! And they don't eat normal stuff like meat and potatoes. They eat grass, branches, twigs, hay, and tree bark. I'm sure there's probably more to add to the list, but for now, that's all we know about. Both Donkey and Sable have tried to nibble on my jeans, but I guess they don't have much interest in material things (pardon the pun), because they didn't strip the clothes off my back like they did the bark on the trees. Notice the tree in the picture (which used to be a healthy plum tree full of leaves and branches) has been stripped clean of bark all the way up as far as the donkey's teeth could reach. Note: The rest of the trees in the corral look the same way.

Because of their fondness for wood, they must have decided that the chicken coop looked like dessert, so they helped themselves to the trim. Fortunately, we nipped that in the bud before they could do real damage. We put up a separate fence just to keep them out of the coop. Sable is not happy about that. Donkey doesn't care—he's got me to nibble on.

Will they eat the fence? We'll just have to wait and see.

*Chairs in the chicken coop? The chickens needed a place where they could sit back and laugh at the donkeys.
Posted by Ann Mullen at 5:59 AM 3 comments: 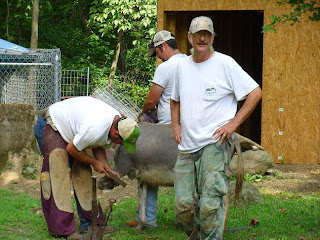 Donkey and Sable were treated to a pedicure this past Saturday. I don't know what else to call it. They had their hooves cleaned, clipped, and filed, so to me, they had a pedicure. I'm not saying they enjoyed the procedure, but they sure felt better afterward. Sable was prancing around, and Donkey had a big smile on his face. Perhaps they were just glad it was over. Andy & Cody (farriers/Value Shod 540-718-1503 Madison, VA) handled them beautifully. Even though the guys were gentle and friendly, the donkeys knew who they were. They saw `em coming and took off. Once Andy & Cody finally captured them, it was a breeze. The only thing missing was the nail polish. What? No nail polish for donkeys? Oh well... I guess that means no bows either.

The man in the camo pants is my husband, Tom, and you can tell by the smile on his face that he thought pedicures for donkeys was pretty cool. I do, too. What about you?
Posted by Ann Mullen at 7:57 AM 1 comment: