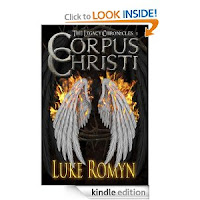 Grams wrote a review of Corpus Christi—The Legacy Chronicles, giving it one star and saying she hadn't read the book.

And then all hell broke loose.

Folks pounced on the reviewer. All have asked the same question: "How can you give the book one star when you haven't read it?"

They also let Amazon know the review should be removed because it was inappropriate and unfair to the author. I even put in my two cents' worth.

But then I started thinking about something. Perhaps Grams felt compelled to write a review right then, not realizing that even though Amazon sends out emails asking people to rate a book, you don't have to do it right then. You can and should wait to post a review until after you’re read the book, or at least given it a try. There’s plenty of time.

After reading the review a couple of times, I think this might be the case here. The review seemed rushed as if Grams felt she had to say something.

I’m not taking up for Grams. I’m just saying she might need to be told how important a review is and that she doesn’t even have to post one unless it’s an honest review of a book she’s actually read.

And we all know it’s not mandatory to post reviews.

Any way you look at it, Amazon should do the right thing and pull the review.

Read the review and comments:
http://www.amazon.com/Corpus-Christi-Legacy-Chronicles-ebook/dp/B00BM5C8O8

Note: Amazon has removed six comments (one of them being mine). I shouldn't have commented in anger. I was ugly, and I do feel bad about it, so in reality, Amazon did me a favor.

Has your comment been removed?
Posted by Ann Mullen at 7:02 AM