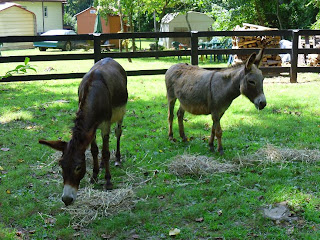 Our two donkeys were delivered Monday, and boy have we been busy. We purchased the donkeys from Carlyle Weaver (Madison, VA 540-718-1200) and found out that a lot of the stuff we were told about donkeys wasn't true. A rope fence will not keep them in. Mr. Weaver laughed good-heartily when he saw our setup. We have a stable, but the fencing wasn't finished and we had roped off sections of it. He said the donkeys would just walk right through it. Fortunately, we have a large dog pen that we could keep them in temporarily. He unloaded the donkeys into the dog pen, and now Tom is working diligently to get the rest of the fence up. Note: We used our pickup truck to block off one area. Love those donkeys! They're so adorable and friendly. So, if you're looking to purchase a donkey (and I'm sure he also has horses—I'll get to see for myself Thursday), he's the man to see. He's honest, his prices are very reasonable, and he cares about his animals. He called us the next day to see how the donkeys were doing. Tom and I used to be city folks, so I'm sure he probably thought the donkeys had gotten away from us. He was glad to hear all was well.

The dark brown donkey is female (a Jenny) named, Sable. The tan donkey is male (a Jack) named, Donkey.

If you have the space, donkeys make good pets. Once they get to know you, they'll come right up to you every time they see you. And, if you don't take a minute to speak or pet them, they'll nudge you and let you know they want attention.