Tom and I just put up Christmas wreaths on the stable and coop so the donkeys and chickens could have a little Christmas cheer. 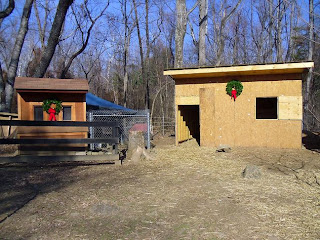 As you can see, Donkey is too busy relaxing to care. Just don't get between him and his food, or you'll see how quickly he can move. 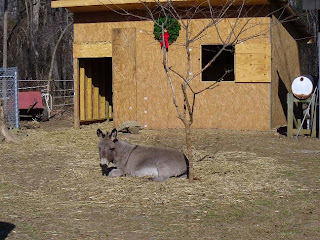 And Sable (due to give birth any minute) is too busy eating for two to pay much attention. Poor thing, she looks as if she's going to explode. I'm sure she'll be glad to have her baby soon, too. I'm still trying to figure out how her little legs can carry all that weight. *Donkeys are pregnant 12 to 14 months. See ladies, we have it easy compared to them. Aren't you glad you're not a pregnant donkey?
﻿﻿﻿﻿﻿﻿﻿
﻿
***Big, beautiful Sable stepped on Tom's foot the other day while he was putting out feed. His small toe is still bruised and looks right rough. I keep telling him not to go into their stalls when they're in there—they don't like it. They'll step on your feet...

I bet Sable weighs 600 pounds.﻿ Don't know for sure because I don't have scales to weigh her... but I'm staying away from her feet. 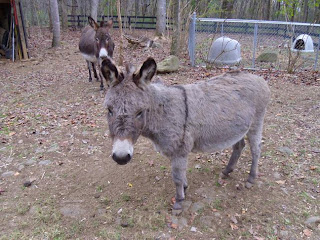 ﻿﻿﻿﻿﻿﻿﻿﻿﻿
﻿﻿﻿﻿﻿﻿﻿Donkey is normally slim, but with his winter coat coming in, he looks much bigger than he really is. He's a mighty handsome guy, don't you think? Warning: Don't stand behind him either. Donkeys have a tendency to kick, and you haven't lived until you've been kicked by one. But that's another story.

So... the Mullen household is ready. We're just waiting for our Christmas baby. Is it going to be a donkette or a donker?

Got any suggestions for a name? We'd love to hear them. Seriously. Leave your comment or email me at aftonridge@aol.com

But please hurry. Sable could have her baby any minute. Hee-Haw.
Posted by Ann Mullen at 6:32 AM

I am thinking a good name would be Jingles for the unborn donkey. It sounds Happy and like Christmas. :)

Thanks, Danielle. Jingles brings to mind the name Belle (as in Jingle bells). Hope it's a girl. I like Belle. Thanks for triggering my otherwise stuck mind. Jingles might be cool if it's a boy. Gotta check with the old ball-and-chain. LOL. Thanks for taking the time to add your imput. BTW—luv your pic.

Anonymous said...
This comment has been removed by a blog administrator.
4:43 PM