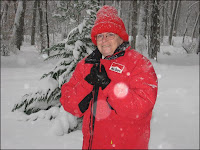 
December 19th will be a day most of us will remember for some time to come. It started snowing on Friday and by Saturday we had eighteen inches of the white stuff on the ground. What a glorious sight! I loved it... even though it meant there would be no birthday dinner for our 28 year old son, and no traveling to Newport News to see our family. We would miss my mother's Christmas party. As a matter of fact we wouldn't be going anywhere for a while. But that was okay, because we were finally going to have a white Christmas! That kind of made everything all right. Excited? Yes, we were. My husband and I were like little children. We went out and played in the snow with our dogs as we watched the snow fall. We even mustered up the courage (and energy...at our age) to build a snowman! It was wonderful. Well, the snow hung around until I had gotten so used to it that I forgot how dangerous it could be. I had trudged through it, played in it, and even drove my 4Runner around the driveway—just for the fun of it. The fun ended the afternoon of December 30th when I slipped on the ice trying to get out of my monster-sized truck. If anyone had been watching, I'm sure they would've have laughed at the sight of me slipping, sliding, and then flopping out of my SUV. I know I would have--at first. But when I hit my head on the running board, and finally came to rest on the ground, it was no longer a laughing matter. I lay there for a few minutes trying to figure out if I were alive or dead... or just injured. Fortunately, I survived the incident. But not so many would be that lucky. Several days later, I read about a young man who had taken a spill on the ice, and then died the following day. More tales of falls soon surfaced, and that's when I realized how lucky I had been. Snow is beautiful, but it's also dangerous. No matter how invincible you think you are, you're no match for the ice underneath it. When you least expect it, you, too, could become a victim of nature's magic. So, what I'm trying to tell you is, don't let your guard down, and don't take chances. Dress appropiately for the weather. Shoes really matter. I was wearing snow boots when I fell, and later I thought about the few times I went out wearing tennis shoes. That was a recipe for disaster. Never, ever wear tennis shoes in the snow! Enjoy the snow, but most importantly, be safe!
Posted by Ann Mullen at 3:23 AM